Good Friday in our neck of the woods it was a beautiful day to be alive...and of course, go ride! 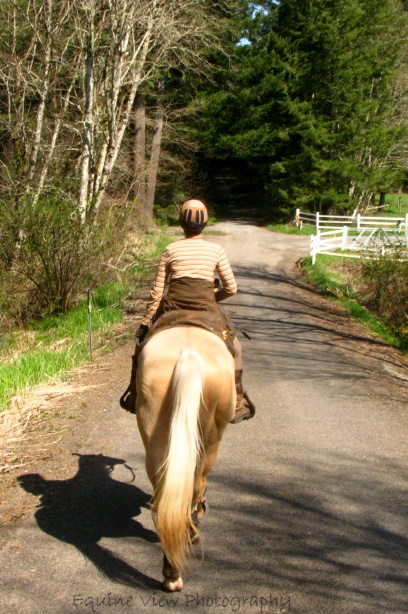 With the hit and miss days of sun vs rain..we sure got it good this day!

We were just really praising God for the day. On this "Good Friday", we revelled in being out and about with our horses in the woods....we share our Faith together and that is such neat blessing!

I mounted up again, rode the 40 minutes to the lower trail from the service road 1/2 mile from home, dismounted for that slick stuff...and finally found a log to remount again. My friend had walked back  aways from us...giving us space. I hurled myself on the mare and stood and looked back at her and Skye. She  saw us and seemed fine, so I started to walk my mare. I looked back again and they had decided to canter up to us...I kept walking slowly...then heard her all of a sudden say, "HOLD UP"...I stopped, turned, and saw through the evergreen tree Big Skye, apparently bucking...but I couldn't see my friend! I heard a loud- "THUD" and then here came Skye...without his rider!!

OH! I told him to "WHOA", throwing my arm up into the air in authority- and so did my mare, swishing her tail and pinning her ears as he cantered to us. He stopped and I was off in a flash to grab his reins.....I heard nothing.... it REALLY- REALLY scared me and I cry again now, to even think of the sight I beheld, as I walked around the little corner.

SKYE snorted loudly, and I gasped...my friend was in a heap on the ground! I prayed so loudly over the sight- " God to have MERCY and Extend GRACE to my friend and for "Jehovah RAFA",(the God that Heals),  help her please and  "Jehovah Saboath", (the LORD of HOSTS) please be protecting her at this very moment from harm."

Using the names of God, in specific times of prayer, is like calling upon a known friend to help.

AUTOPILET started in me..... I multi tasked, got my phone out...the Brittish voice, telling me that I had not moved and how much time had passed- was NOT helpful! Turned him off. Pressed my speed dial number for Gemma, whose property we parked  on.
I just couldn't get the horses tied fast enough... got mine first, I had my halter bridle on with a rope...that was totally easy and she was totally good about it...then as Skye was shying and snorting still....I kept and EYEBALL on my friend, prayed  as the phone rang- kept tying the horse and then- SAW HER CHEST MOVE up and down in a breath!!!
I called out to her, "Praise JESUS!!," and also - "Joni, Don't move!!"..knowing I had to get over there to keep her still.
The horse was being a pill...moving back and forth and making it extremely difficult for me to tie... Then, my friend Gemma  answered on the phone! I am yelling at Joni, trying to tie the horse....told her that we had a horse accident, where we were and my friend was unconscious and to bring the car.
THAT was 2 MINUTES into it... As I finished the call and finally got her horse tethered and before I could reach her..she slightly raised up from the ground, "Joni don't move", I said again. She also moved her feet to flat on the ground and her knees to bent. I was happy she was not paralyzed...but quickly got to her, to keep her from moving anymore!
3 MINUTES into it as I finally got to my friend and she dazily looked up and my teary face and said, "What happened??" for the first time...I quickly realized...she needed professional help- NOW! 5 MINUTES into it I called back,  asked for the nearest EMT team to come for her,and  please call 911!
All this seemed to take so long....she kept coming and going into a waking state to not. She complained of a headache and a feeling of needing to throw up. I thought about which direction to turn her head if she actually did...she was flat on her back. I got her phone out of her pocket as she closed her eyes again. MAN...I had a hard time figuring out her phone!! I had to call her husband! I also had to turn off the Brittish man telling us things about the"workout paused"!! She opend her eyes and began to ask again, "What happened?"..this went on for 10 minutes..her asking me that..I asked her some questions too..she had no answers for me except-her husbands name and her own. I called him, gave him directions..then called the PORT BLAKELY land manager to open the gate for the EMTs. THEN...since I had the number, I called the man at the end of the road...told him what happened. He was on it...told me he would bring a MULE down for her to be transported out. It is a QUAD vehicle.( this was a total God -going before us-*** circumstance, I had just met the man the wkend before!)
Everyone arrived shortly..I was trying to move the horses below the action as the team helped my down friend...my mare became too excited to take past Joni on the ground..do I had to take her above them. 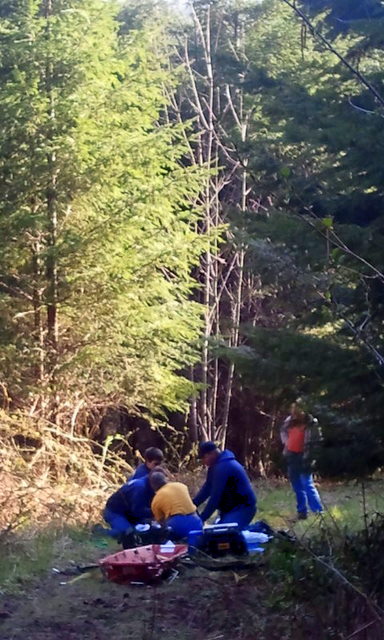 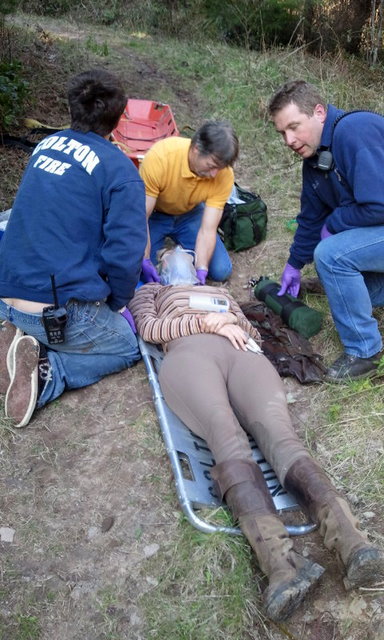 The team looked at her helmet, asked me questions and arranged for a "Life Flight" helicopter to come to the nearest town. It all was done with within 35-40 minutes time!

Blurry phone shot...the MULE taking her OUT OF THE WOODS. 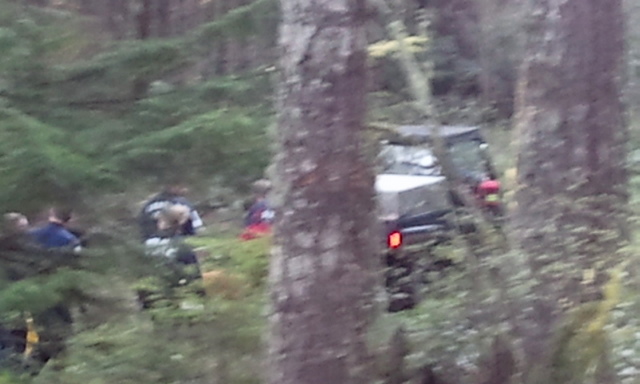 I watched them load her into the ambulance vehicle. I stood with my friend John and Gemma, who's property we were parked on. They helped me so MUCH by coming to my(our) rescue!! They too, Share the same faith and it greatly relieved me to know...prayers were sent out from the first minute onward. 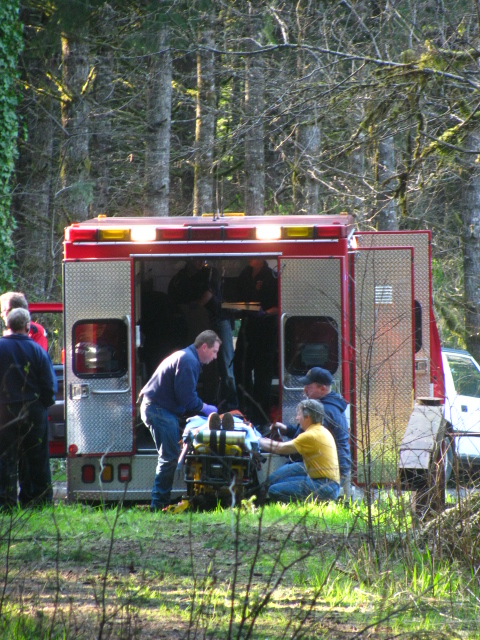 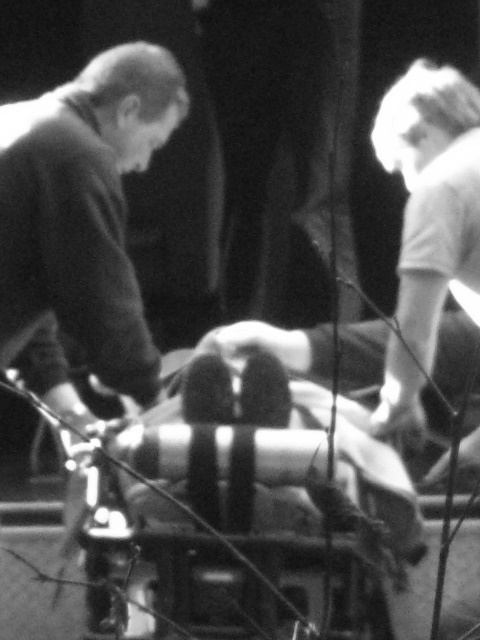 I called my husband to pray and also the Stable owner where we boarded..to let them know what had occurred and that I would try to load Skye and Wa and bring them home again.

Yet, another blessing..Skye loaded for me in four halts and five steps! He never tried to turn away or back up...I was so thankful...he knew it too, as he got the remaining carrot chunk from my pocket!

Got them home safe, unloaded, untacked them and put them into stalls...parked the trailer, and just let down and balled and balled all the way home! 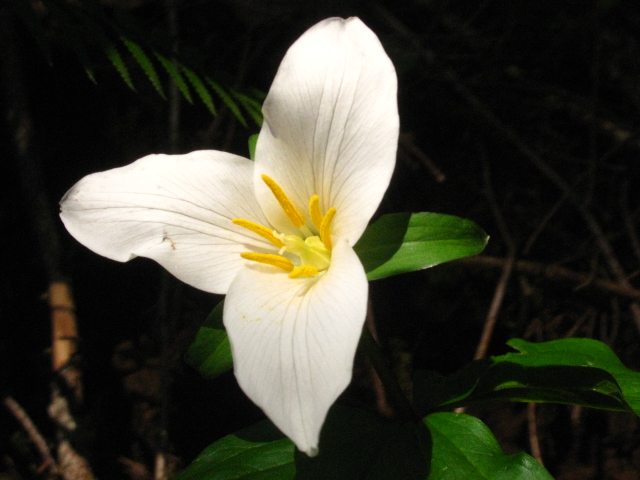 Trillium flower, from the top of the trail we rested on~

As the night progressed calls came in to let us know that the cat scan was clear and that Joni really wanted to go home...they allowed her to! She is now resting at home, with an apt to return to the hospital in a week.
I went to the stable yesterday, my mare was so relaxed and worn out from the previous day... the owner was filling the stalls with shavings and had thrown the empty white bag in the aisle behind us...the wind picked it up suddenly. I watched in almost slow motion, as these things seem to be sometimes, as my mare in cross ties reacted ever so slightly as the bag almost blew under her legs. She was just so out of it, she barely reacted to one of her Nemesis's! I  just took the mare out to eat grasses for a few hours.

Joni and I spoke before I had left for the stable...her memory was coming back so nicely,  as I asked her what she remembered. She told me she remembered me jumping on and that she had moved Skye aways away, because he was so antsy. After I jumped on...then, she said she thought maybe I had been trotting or cantering- TO  MY HORROR- she thought that...in fact, I was having huge, painful thoughts of my walking  the mare at all, was a fault to the day. She quickly said to me, as I cried, " DON'T you do that to yourself! There was nothing that you did wrong, my horse sometimes does these things.."....

I knew that I was forgiven, be it my fault or be it something we had just discussed about horse back riding being "inherently dangerous".

She also told me that she had missed her only Helicopter ride by being out of it..and that once in the Hospital, when they told her they had to cut her shirt off...she had requested, "Please don't cut My riding boots off!"

All in all this EASTER SUNDAY, We are overjoyed by the Love of GOD towards us.  And my girlfriend and I have been bonded closer together  now-through the hazardous LOVE OF HORSES!

Update: Joni now back in the saddle!

To read the original blost post: Please visit the All Things Horses Blog

Have a comment? Please feel free to leave one below!

Have you ever been involved in an equestrian accident? Please share your story with us, and we'll post in the Headsmart Testimonials to help promote rider safety.

Be sure to include a photo!

By submitting your story, you are agreeing to these terms.